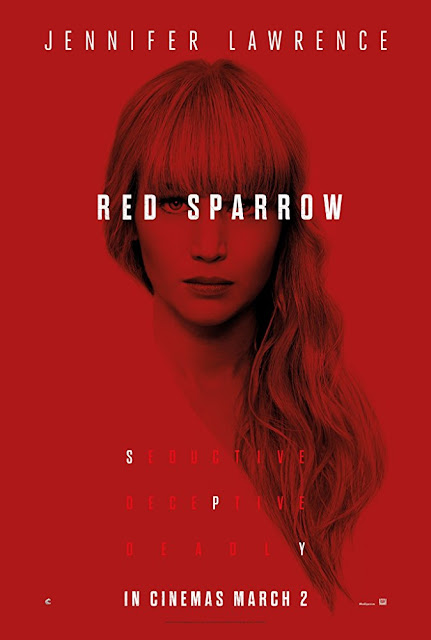 Jennifer Lawrence is perhaps the most American actress alive - which is to say, entirely intuitive, impassioned, and non-theatrical. It's as though she less memorizes and recites lines of dialogue than she absorbs it from the surrounding atmosphere. When a director and script know how to utilize her talents, she's absolutely sensational - capable of everything from entirely controlled to painfully raw. Unfortunately, it also means that when she doesn't have a script and director plugged into her character, she can seem simply lost. Across three X-Men movies, she's given exactly one good performance, and even Days of Future Past would have done just as well if not better with Rebecca Romijn.

But Francis Lawrence knows exactly how to use Jennifer Lawrence. (hereafter referred to as FL and JL, respectively) After three Hunger Games movies, these two are in perfect sync. FL focuses on JL's emotional journey, giving her room to explore every layer of Dominika Egorova's inner and outer life. JL's fiery, complex performance manages to be simultaneously mysterious and sympathetic; we rarely know exactly what Dominika is up to, but we feel every moment of pain, terror, joy, and satisfaction. And we're just as fascinated by her intelligence and chameleonic ability to be whatever her opponent wants... until he drops his guard, and she gets precisely what she wants. It's the best JL has been in years, and a wonder to watch. 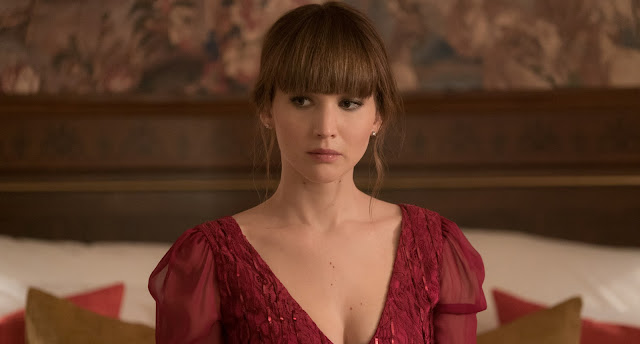 Of course, the phrase "use Jennifer Lawrence" is oddly appropriate here, as Dominika is put through one hell of a ringer here. A Russian ballet star who spends all she has supporting her ill mother, her career is cut short by what appears to be a tragic accident. When it turns out to have been a conspiracy by her co-stars, she achieves violent revenge, but that doesn't help her situation.

Impressed by her, however (and interested for far less savory reasons), her uncle Ivan, a high-ranking intelligence officer, promises to generously reimburse her if she carries out a mission involving seduction. She reluctantly accepts. However, the mission goes horribly awry; Dominika is raped, and the politician brutally assassinated just too late to spare her that fate. But Ivan soon makes it clear that it didn't go awry at all; and, since she is now a witness, he controls her fate, and sends her away to become a Sparrow -- an intelligence operative specifically trained in seduction. The highly intuitive, observant Dominika excels at the necessary skills while rebelling in every way she can. 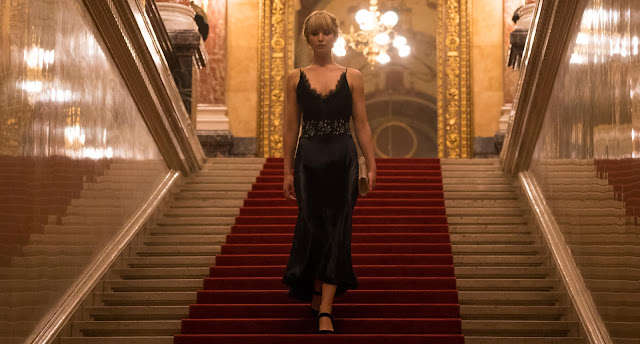 This gripping first hour of the film, while extremely unpleasant to watch, powerfully rails against men trying to sexually control and own women. Dominika goes from one torment to another, all detailed in ways uncomfortably realistic and familiar, but given a glossy thriller sheen by the overcast of the genre. Her struggle to navigate this exploitation, to find ways to own her person, is the heart of the film, and from the ballet through the training, it's extremely effective. There's a moment where, in the most vulnerable possible position, she takes absolute control in a way that both proves her ability and rejects the order, that's deeply satisfying.

As the plot kicks in, it soon becomes apparent this long, difficult setup was for a fairly straightforward if solid espionage plot. Interspersed with Dominika's story, CIA agent Nate Nash (Joel Edgerton) blows his cover when protecting "Marble", his asset in Russian Intelligence. He convinces his superiors to let him have one final assignment before being reassigned: ensure Marble is safely and smoothly put in touch with the new contact.

Dominika's first assignment, naturally, is to gain Nash's trust and learn the name of her contact. Her own agenda, however, remains mysterious to both sides; when she tells Nash she's going to betray her superiors, is she lying to gain his trust? Is she telling the truth and becoming a double agent? Or does she have some other goal in mind? This is intriguing material, a vicious, feminist le Carre, if you like. 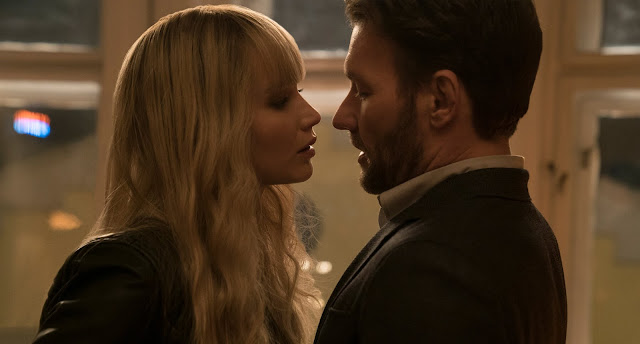 Unfortunately, it's also nearly 2 1/2 hours, and its' set-pieces across that incredible length are almost entirely brutal, graphic torture scenes of one kind or another. There's a point to all this about the way humans exploit each other being made exponentially worse by the inherently backstabby nature of espionage, but that point was made the first time JL is brutalized, and pounded remorselessly in every reel. This straightforward plot would be fine if it wasn't so intensely unpleasant for such an extended period of time.

By the time the story at last reaches its' denouement, the reaction is more relief that it's finally over than any sort of catharsis. It doesn't help that the resolution isn't particularly surprising when it finally arrives; the pieces of the puzzle are pretty clearly laid out by the moment of truth. The film briefly threatens to be fun when Mary Louise Parker brightens things up as a snarky American double agent, but she's not around nearly long enough.

Let it not be said that it's not executed well, though. Ever since his debut in Constantine, FL has shown himself to be an immensely skilled stylist. His flashiness is restrained here in favor of a choking, overcast atmosphere outdoors and cold elegance indoors. The many torture scenes are all given variety and the focus kept on the story and character purpose of the horror. The one real visceral thrill of sorts is a close-quarters knife fight, easily the most wrenching one since Eastern Promises. 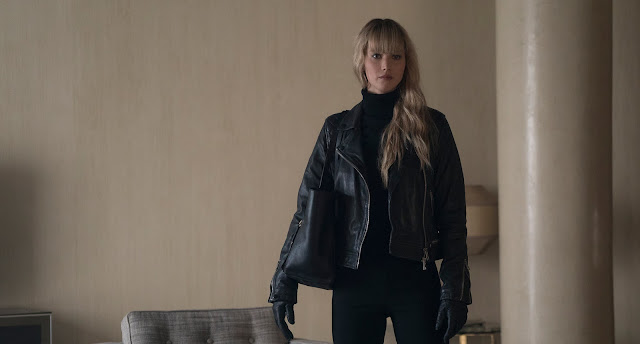 Still, the film lives and dies on JL, and she's at the top of her game. If only the film wasn't a merciless slog to get through, it would come highly recommended. As it is, it's really only for JL fans with very strong stomachs.

MPAA RATING: R, of course. The violence, often sexualized, is truly horrific -- as it's intended to be.

Box Office: Domestically, $41 million at the moment, will end its run just under $50 million. $110 million worldwide so far. Will likely end up a minor loss, unless the worldwide grosses really pick up.
Francis Lawrence Jennifer Lawrence Joel Edgerton spies thriller 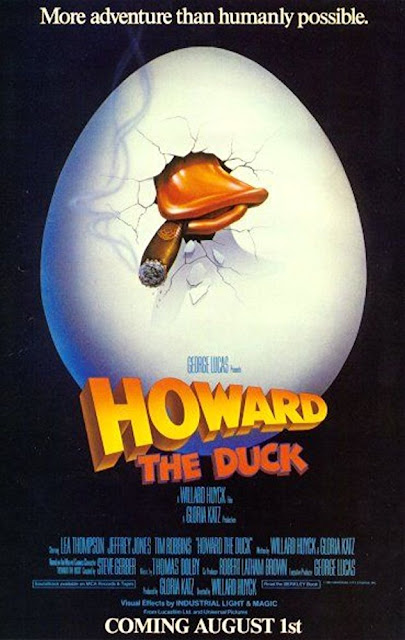 Given the imminent release of Avengers: Infinity Wars , what could be more fun or appropriate than revisiting all the Marvel Cinematic Universe? (We'll see how I feel three weeks from now, spent, burnt out, and shuddering in dread at the very word "Marvel.") But to help chart the sheer impact of the series, and to add to the fun, I'd like to start at the beginning, with the first attempt to turn a Marvel comic book into a big Hollywood blockbuster: Howard the Duck . Setting aside early serials, low-budget children's films, or failed attempts, comic book movie history splits pretty straightforwardly into decades. The first era begins in 1978 with the titanic release of Richard Donner's  Superman: The Movie . Exhilarating, heartfelt, and spectacular, it was a cultural phenomenon, and everyone wanted in on it. Unfortunately, only Richard Donner seemed to know the magic formula. Rather than heart and verisimilitude, film makers focused on the mostly lighth
Read more